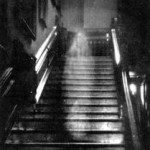 When you are seeking to experience paranormal phenomena, you must first become aware of some of the basic ways in which it presents itself in circumstances where haunting is present. Not all of this phenomena will be experienced at each haunting but be aware of them and be prepared for them because on paranormal investigations the strangest things can happen…

Unexplained noises
footsteps; knocks, whistles, squecks, banging, rapping; scratching sounds; sounds of something being dropped. Sometimes these noises can be subtle and other times they can be quite loud.

Doors, cabinets and cupboards opening and closing
most often, these phenomena are not seen directly. One either hears the distinct sounds of the doors opening and closing or one will return to a room to find a door open or closed when they are certain that it was left in the opposite position.

Lights turning off and on
likewise, these events are seldom seen actually occurring, but the lights are switched on or off when the experiencer knows they were not left that way. This can also happen with TVs, radios and other electrically powered items.

Items disappearing and reappearing
this phenomenon is often referred to as Disappearing Object Phenomenon. Also, “the borrowers” phenomenon, and it’s the familiar experience of not being able to find a regularly used item – say, your set of car keys – which you believe you placed in a spot you routinely place them. But they’re gone and you look high and low for them with no success. Some time later, the keys are found – in exactly the place you normally put them. It’s as if the object was borrowed by someone or something for a short time, then returned. Sometimes they are not returned for days or even weeks, but when they are, it’s in an obvious place that could not have been missed by even a casual search.

Unexplained shadows and images
the sighting of fleeting shapes and shadows, usually seen out of the corner of the eye. Many times, the shadows have vaguely human forms, while other times they are less distinguishable or smaller.

Strange animal behavior
a dog, cat or other pet behaves strangely. Dogs may bark at something unseen, cower without apparent reason or refuse to enter a room they normally do. Cats may seem to be “watching” something cross a room. Animals have sharper senses than humans, and many researchers think their psychic abilities might be more finely tuned also.

Feelings of being watched
this is not an uncommon feeling and can be attributed to many things, but it could have a paranormal source if the feeling consistently occurs in a particular part of the house at a particular time.

Empathic Response
One begins to feel the emotions or physical sensations of the entity present.

Fight or Flight
Many respond in a primal way by feeling an increase in adrenaline. This dates back to a time when it was necessary for human survival to be able to detect even unseen enemies, in this case, spirits.

Mild psychokinetic phenomena
hearing a door open or close is one thing. Actually seeing it happen is quite another. Similarly, actually seeing a light go on or off by itself is greater proof that something unexplained is happening. Do you see the TV or radio turn on. Some people report that when they are in bed they can feel and/or hear something sitting on the bed.

Feelings of being touched
the feeling of being watched is one thing, and actually feeling like you are being touched is quite another. Some people feel something brush past them, something touching their hair or “a hand” on the shoulder. Some feel a gentle poke, push or nudge.

Cries and whispers
on occasion, muffled voices, whispering and crying can be heard. Sometimes it’s music from some unknown source. People can hear their names being said.

Cold or hot spots
cold spots are classic haunting symptoms, but any instance of a noticeable change in temperature without a discernable cause could be evidence.

Unexplained smells
the distinct fragrance of a perfume or cologne that you do not have in your house. This phenomenon comes and goes without any apparent cause and is often reminiscent of a deceased loved one.

Apparitions
physical manifestation of a spirit or entity. These phenomena are also very rare and can take many forms: human-shaped mists or forming mists of some indistinguishable shape; transparent human forms that disappear quickly; and most rarely, human forms that look as real and solid as any living person, but that disappear into a room or even while being watched.